The start - Our first objective in the background 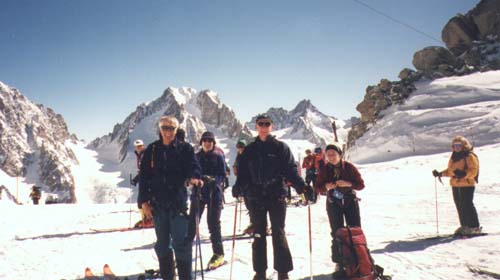 The week before Easter, a group of 5 of us - all fairly mature adults(!) set off to do the Haute Route - from Chamonix to Zermatt in the company of a guide, Peter, who happened to be a friend and neighbour of ours. Day 1 started from the top of Les Grands Montets (3,300m) with a ski down to the Argentiere glacier almost 1000m below complete with heavy rucksacks. Here we are at the start. 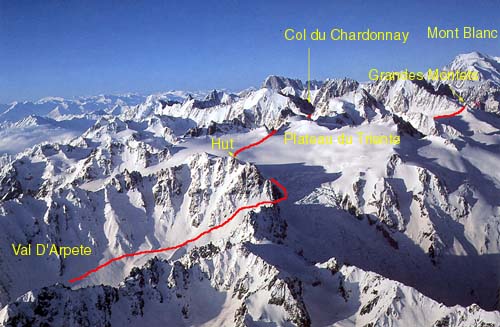 This aerial view shows the way we went although some of the route is out of view. The Plateau du Triente is all above 10,000ft

Putting the skins on 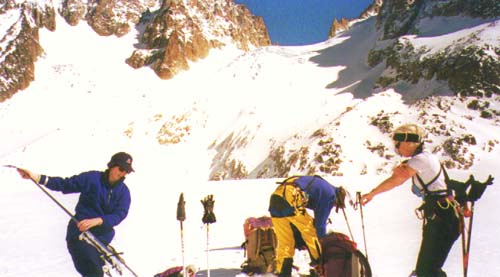 Down on the glacier it's time to put the skins on our skis. The Col du Chardonnet lies in the background and we are now faced with a 3hr climb up it back up to the same altitude as the starting point (10,400ft). Our rucksacks suddenly look and feel considerably heavier!

Stopping for a breather 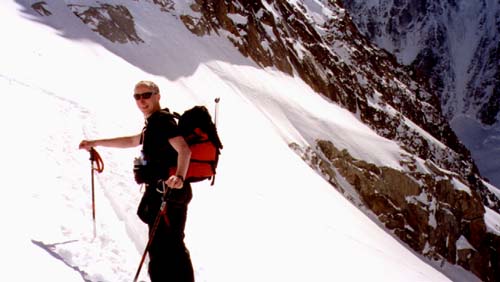 Part way up the Col du Chardonnet. It's too steep to do direct so we have to zig-zag with kick turns at the corners.

Not far now - nearing the top of the Col du Chardonnet 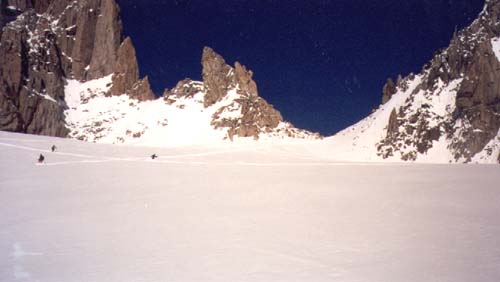 After 4 hours, we still haven't reached the top and exhaustion and dehydration are beginning to take their toll! Due to a late start we are now well behind schedule and it looks as though we won't make the refuge by nightfall 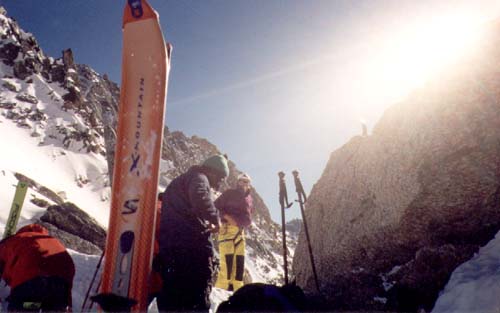 Sunset and we still have a long way to go!

The top of the Col at last, only find another two groups still trying to abseil down the steep slope at the other side. We finally go over after another hour's delay. Normally you can simply slide down here hanging on to a rope for some help. The strong winds of the last month have however piled the snow up and made the descent almost vertical. 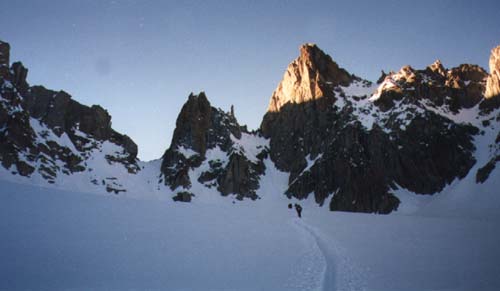 We all made it to the bottom of the couloir only to find that the snow here, instead of being light powder, was breakable crust and almost unskiable. We weren't the only ones falling over; we could see various other people ahead doing the same thing. The big problem is that getting up with a big rucksack is so tiring at this altitude (still over 10,000ft). By now, night was fast falling and we still had a long way to go. We rounded the corner and could see the next col (Fenetre de Saleina) looking really cold and difficult. You may just be able to make out a few dots against the snow in the photo. These are the group in front, trying to climb a vertical wall of soft snow.

After a really agonising struggle we finally all reached the top in the darkness. Fortunately, three of us had head torches. We should have been able to see the Cabane du Triente from here but once again, the snow conditions were really bad. The wind had excavated a large bergschrund, the other side of the col. Instead of simply being able to ski off over to the other side of the glacier, we had to lower our rucksacks on a rope and climb down a rock face into the bergschrund. One at a time we had to put our skins back onto the skis (no easy task, when they are frozen) and skin back up out of the gully.

At long last we could see the lights of the hut in the distance. Another hour and we were below it. We skinned up for another half hour and finally arrived, totally exhausted and dehydrated at 9:30pm, having been in the queue as the Grands Montets opened at 08:30am!!!

Fortunately, the guardien had been warned that we were coming. No doubt he could see our lights across the glacier. There was hot soup ready for us and numerous bottles of water and within 30 mins we were tucking into spag bol and salad.

With five blankets each, we rolled into our beds that night. Never have I felt more ready for sleep!

Breakfast in the Triente Hut 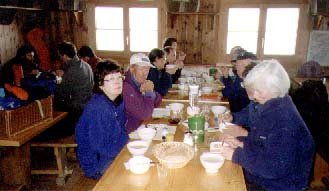 Next morning we gathered for an amazingly good breakfast (especially considering how inaccessible the Triente Hut is. At 3170 m. everything has to come in by helicopter. There were only 15 or so people staying there last night, although once the ski touring season starts at Easter, the place will be packed. 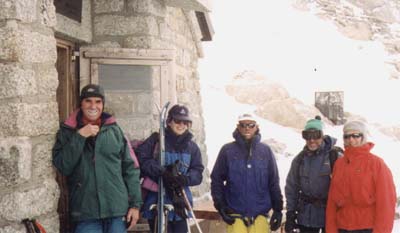 After breakfast, we kitted up and gathered outside. It was bitterly cold and gusts of snow eddied around us. We started off down onto the glacier and skied in some quite nice snow to the top of the Triente Glacier icefall. Peter headed off down a steep snowfield to the side of the glacier. "Follow my ski trail and look out for crevasses", he said. It was as steep as anything I have skied on, and I felt quite apprehensive. There were one or two falls and temporarily lost skis as we negotiated our way down. The strong gusty wind and occasional poor visibility didn't help. At one point, Peter turned and then sidestepped down.

Unfortunately, I turned in the same spot and didn't sidestep, but skied forward, not noticing an ominous dark shadow on the snow. "Stop", Peter shouted. I did - immediately. He said, "you are right on top of a crevasse!" He skied below the crevasse and threw me a rope which I clipped on, while he belayed me.

"Move very gingerly forward". I did and promptly fell through the snow into the crevasse. Because of the weight of my rucksack, initially I ended upside down, held by both the rope and one ski which was wedged above me. I managed to wiggle this free, very conscious of the consequences of losing it, and was now suspended the right way up. It wasn't a very deep crevasse, fortunately being at the edge of the glacier. However, as with all crevasses, the snow muffles all sound, so it is impossible to communicate with those on the surface.

Peter and the others hauled up my rucksack, skis and poles and passed me an ice axe. With them pulling on an ingenious pulley system which Peter had rigged up, and me cutting steps with the axe, I was soon back on the surface. 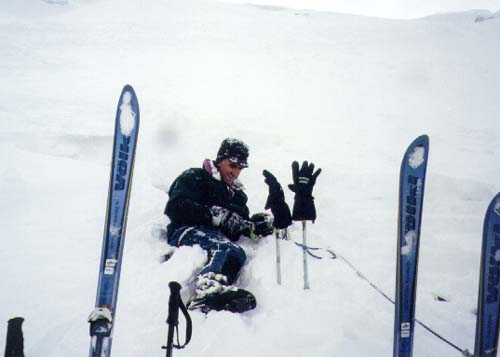 This was a salutary lesson to me, and I firmly resolved that in future I will take the utmost care to follow my leaders footsteps exactly!

Once we had gathered ourselves together, we skied off around a steep traverse at the very top edge of the snow field ,close in to the mountain until we reached the Col des Ecandies. Once more we were faced with a steep climb through soft snow. Carrying our skis and sticking them vertically into the snow at every step (cut by Peter) we pulled ourselves up to the Col. From here it was going to be downhill all the way and we were hoping for some good powder down the Combe des Ecandies and the Val d'Arpete all the way to Champex.

Looking back up the Val d'Arpete 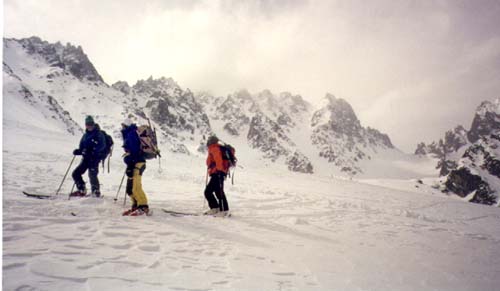 The snow field at the top was really good and no-one minded the odd tumble - it was soft and fluffy. Peter showed us how to do it, leaving beautiful "S's" in the untracked snow.

Halfway down the long valley (see the picture above), the snow changed and there was a lot of old crusty avalanche debris which made skiing more difficult. The weather too wasn't as nice today as yesterday, but the scenery was still magnificent.

We arrived in Champex at around 1:00pm and had a committee meeting about whether or not to continue. The forecast was not good for the next few days and we didn't relish getting stuck anywhere. The general consensus was to call it a day and head back to Chamonix for a much needed bath. We were all resolved to try again next year.

Boy, did I need a bath 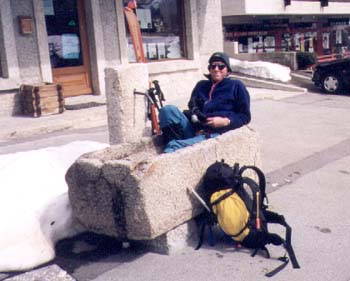 The group ahead of us - mostly younger and fitter than us, carried on and spent two days in the Montfort Refuge watching the snow come down. They then carried on and were forced to build an igloo and spent the night in the snow, due to dangerous avalanche conditions. Some times, things just turn out for the best!!