Yet another attempt at finishing the Haute Route - this time successfully!

Our good friend and neighbour in Argentière, David Hopkins is a mountain guide. When he kindly suggested that I join him, his fourteen year old son Jeroen and two colleagues, Andrew and Rebecca, I was really thrilled. We planned to start from Arolla and climb to the Cabane des Vignettes. From there we would ski to the Refuge des Bouqetins, taking our food supplies with us and the next day, ski the rest of the way to Zermatt over some of the most isolated high glaciers in the Alps.  For me, this would be the culmination of an ambition, somewhat frustrated over the last three years.

We started off from Arolla in Switzerland and climbed 700m up the glacier to the Cabane des Vignettes (3160m), the place we had "bailed out" from three years ago. Strangely, the conditions were very similar, with blowing light snow and poor visibility. Fortunately we caught occasional glimpses of the helicopter landing pad at the refuge high on the ridge above us and this was encouraging. 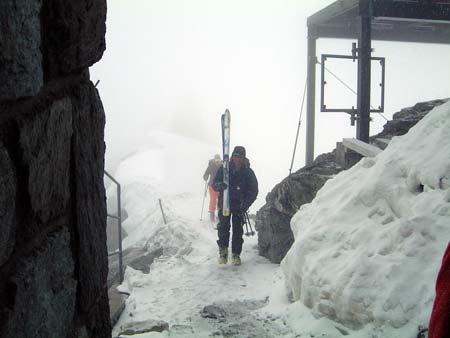 The weather looked really gloomy and forbidding as we walked up the ridge to the refuge. 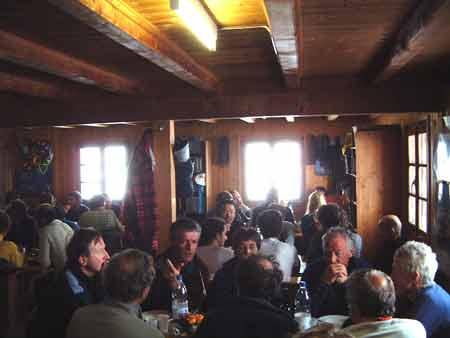 It was rather crowded when we arrived, just in time for dinner.

They had thrown out the old blankets since my last visit and now had some really comfortable and warm duvets. 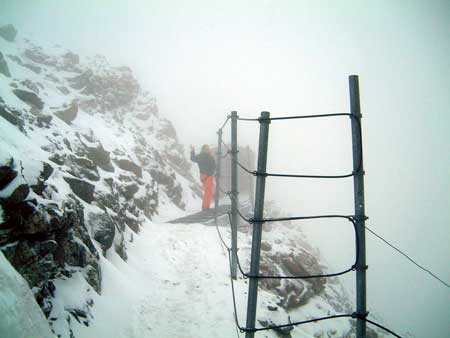 However the "awesome crapper" was just the same. Rebecca showed great aplomb walking along the icy path with a fearsome drop. 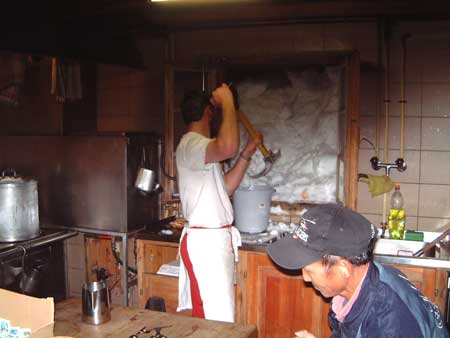 It really is amazing how these refuges produce dinner for up to 100 or so people and wash up with no running water other than plenty of melted snow conveniently to hand!

We passed a comfortable night and woke up in time for breakfast, served between 05:00 and 06:30. Since we didn't have too far to go, we opted for an 06:00 reveille. Unfortunately the cloud and mist of the previous afternoon and evening was still very evident. Very wisely, David decided to delay our departure until it had cleared. None of us wanted to end up as a statistic! 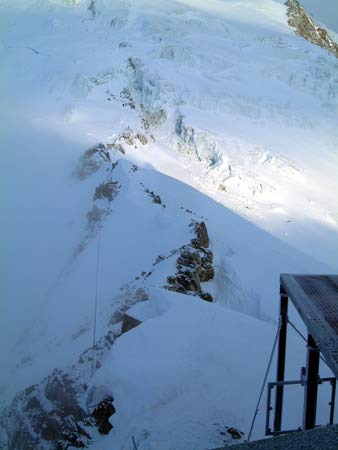 Looking out of the window, we could see the the route lay along to the right of the ridge and then climb back over it to the snowfield at the top left of the picture. 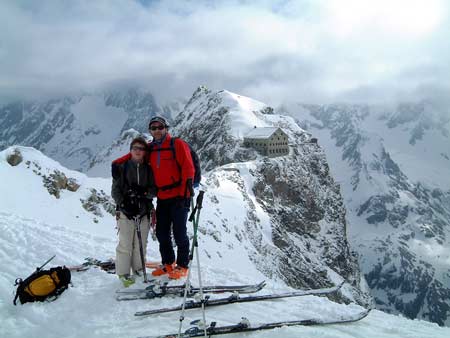 David and Jeroen with the Cabane des Vignettes - You certainly wouldn't want to sleep walk here!

At this point we could put our skis on and head downhill for a while. 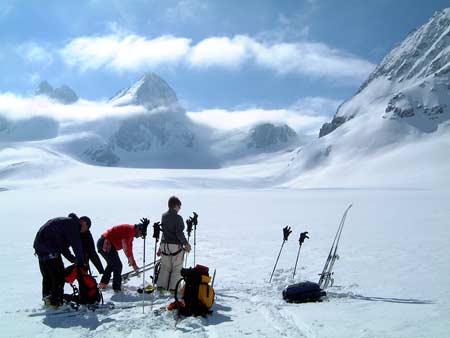 After negotiating a fairly steep little descent we put our skins on the skis to start the long climb 400m up to the Col de L'Eveque (3392m), seen in the distance here just to the left of the Petit Mont Collon (right of photo).

At the top, the view was magnificent and we spent a while orientating ourselves with the map. We could see the tracks in the distance which other skiers had made on Col de Mont Brule on their way to Zermatt, but we were heading for the refuge des Bouquetins. It wasn't at all easy to see, partly because it is so small and blended in with the rocky outcrop on which it stood. Eventually we spotted it! 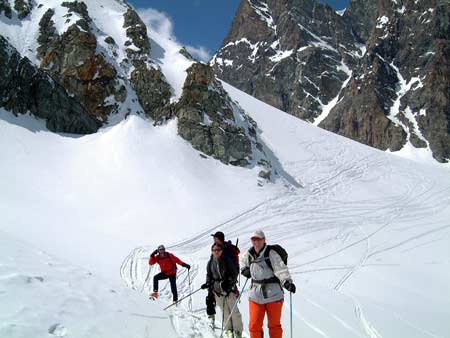 The ski down from the Col de L'Eveque was wonderful and all thoroughly enjoyed it. It was followed by a a 15 minute trudge across the glacier before climbing up to the hut, where we arrived in the early afternoon

The refuge des Bouquetins is not manned and officially can accommodate 18 people. It is a tiny circular wooden hut with six large three man beds like the segments of an orange, clustered around a central wood stove. Very cosy. The climb up to the hut was warm work in the full heat of the midday sun.

As I approached it, I could see a plume of smoke curling out of the chimney. There were obviously residents! I stuck my head in the door and was cordially greeted by a man and two women, who had skinned up form Arolla that morning. They offered me a glass of red wine which was very welcome.

Our residents soon left, heading back down the glacier to Arolla and we spent a very pleasant afternoon, "chilling out". I even had a shower from a saucepan of melted snow! 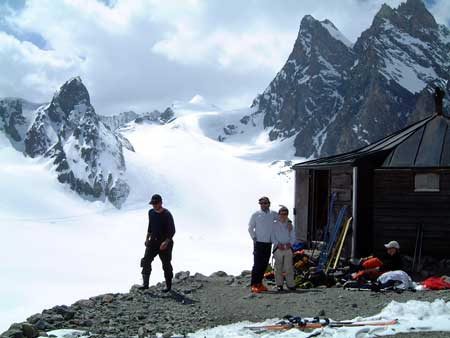 In the photo, the Col in the distance is Col de L'Eveque. You can just make out our ski trails down and to the left. 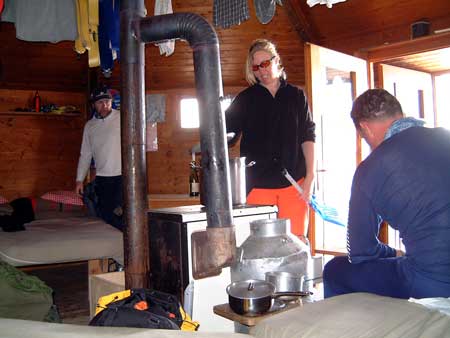 Rebecca is melting snow for our water bottles.

We all spent a very comfortable night as no-one else had turned up and we had the hut to ourselves. The fire went out in the early hours but there were sufficient blankets to keep cosy.

We needed an early start in order to arrive at the top of the Stokji Glacier before midday. The alarm went off at 05:00! Andrew was very quickly off the mark and had the stove roaring and a pot boiling within twenty minutes. It was a beautiful crisp morning and we set off as the sun started to rise, a little after 06:00. 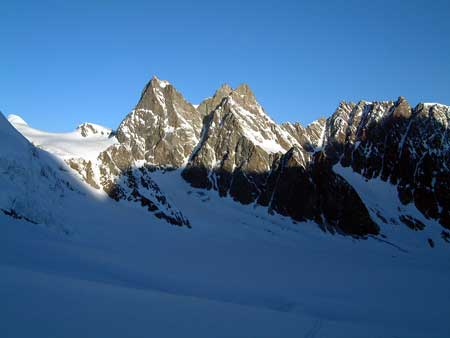 We skinned up the glacier as the light improved and could see the tracks up towards the Col du Mont Brule (3219m) on the left of the photo. It took about twenty minutes to get to the base and it certainly looked steep. There were zig zag tracks which skiers had put in on previous days but the whole slope was very crusty and beaten up with footmarks. It took us a while to get to the top, but once there, the view was worth it. 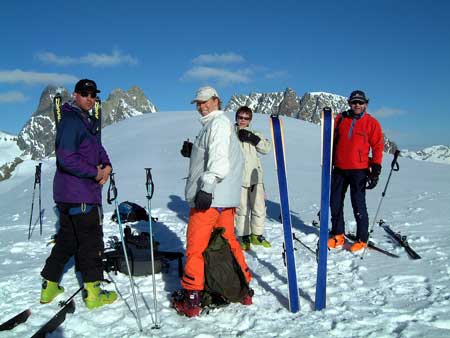 The skins by now were very wet and icy and we would need them later for the long drag up to the next Col. There was nothing for it but to wrap them around our waists under our shirts to keep them warm and the glue sticky!

The view ahead was quite the most magnificent I had ever seen. This was the "Haute Glacier de Tsa de Tsan", one of the most inaccessible places in the Alps. At this point we were to cross temporarily into Italy, before climbing back up into Switzerland for the last ascent of the trip. 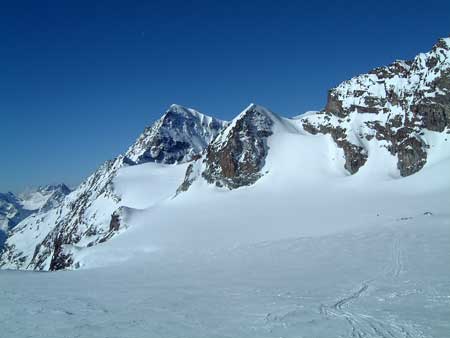 Looking back from the Tsa de Tsan the way we had come from the Col de Mont Brule. You may be able to see the ski tracks coming from the snow field on the shoulder to left of centre. 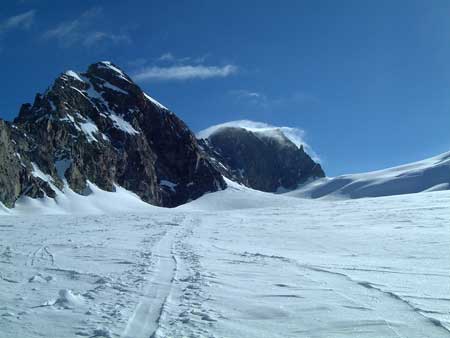 This is the way ahead, across the glacier and the long climb up to the Col de Valpelline (3568m) - the last climb on the Haute Route, about 600m. The wind was blowing as you can see from the plumes in the distance to the left of the col. The surface was very icy and we needed our ski crampons as well as the skins. We slowly plodded up the slope being overtaken by two skiers who didn't even have enough energy left to acknowledge our presence. 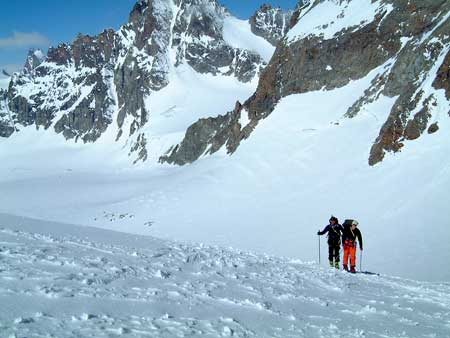 Andrew and Rebecca skinning up the last stretch on some very crusty snow.

Everyone had told me that the best sight in the world is the little bump that appears on the horizon and gradually grows into the magnificence of the Matterhorn. They were right, not only was it magnificent but it marked the end of the uphill! 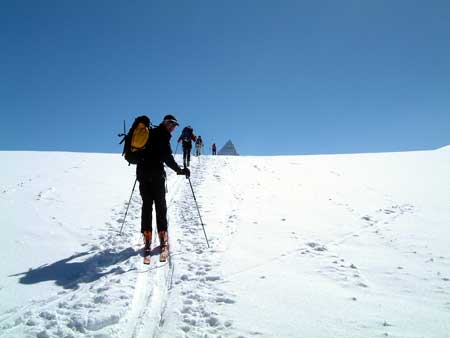 That pyramid ahead is the tip of the Matterhorn. We are nearly there! As David said, "The only climb left to do is up the steps to the bar" 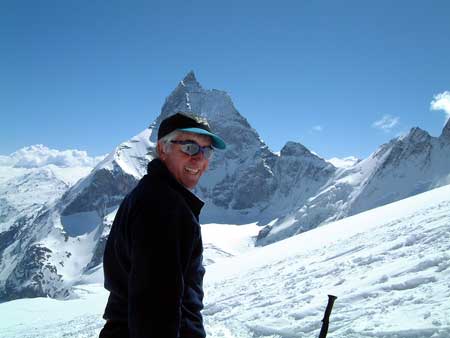 We made it! One very happy skier

We had reached the top by 11:00 am which meant that the sun had hopefully not melted too much of the very dangerous seracs and hanging glaciers on the slopes of the Matterhorn. We would have to make our way down the Stokje Glacier, avoiding the enormous crevasses and skiing very close to the mountain itself. Once we had negotiated the first obstacles, the crevasses, there would have to be no delays for photo shoots or anything - just ski like hell for the next 5kms and hope that there were no avalanches or falling seracs. 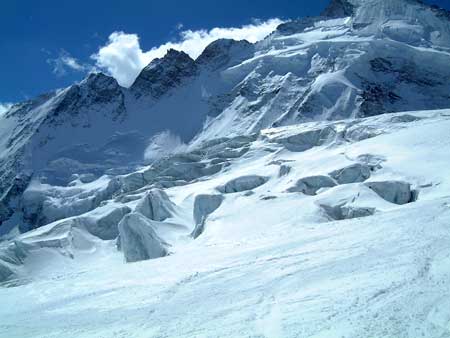 This is an example of the terrain - those are big crevasses! 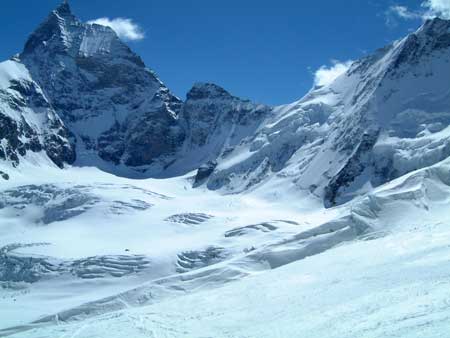 The route down was quite complex and David took great care in navigation. He would ski on ahead and look for the safest line before waving us on to join him. I had heard from some friends who had skied this route just 5 days previously, that the snow here was great. Conditions had obviously changed because it was now "breakable crust" and very cut up - a skiers nightmare. Very difficult to turn and there were a few tumbles.

We all made it down through the icefalls and then came the long schuss under the buttresses of the Matterhorn. We left long gaps between us and just went for it! 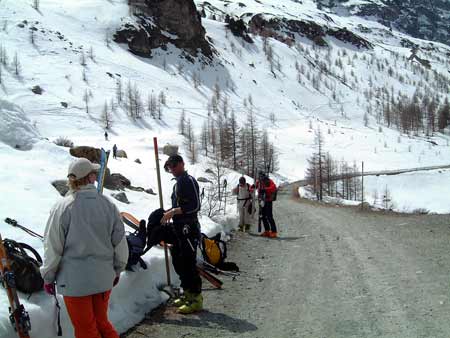 Eventually the snow petered out and we realised that the excitement was over. We had all arrived safely at the end of the valley.

This was a really fantastic adventure and we all had enjoyed an experience which few can have shared. We all feel immensely grateful to David Hopkins for making this possible.